A Natural Consequence of Curvature

The simplest way to produce the precession observable is the binary model. In this common stellar system, the observable of a moving equinox (or stars appearing to move relative to the equinox when viewed from earth on the date of the equinox) is simply the geometric effect of a solar system that curves through space as part of a binary system. As the solar system curves through space it gently changes the orientation of the Earth relative to the fixed stars (but not relative to objects within the moving solar system such as the sun or moon). This model requires little or no local wobble and is fully consistent with observations that show little or no precession relative to nearby objects and a full 50 arc seconds of precession relative to distant objects.

Pretend the straight blue line, drawn through the sun and earth, is the sightline of an observer looking out toward the constellations. Notice the observer now has a changing orientation to distant space, and with each vernal equinox, his gaze can slightly precess (change orientation) relative to the constellations or fixed stars without any wobble of the Earth required.

Zoom in to see the “incremental change” in earth orientation that naturally occurs as the sun and solar system curves through space. One year of this change is what astronomers now call one year of precession. In other words, in the moving solar system model precession is simply angular velocity. 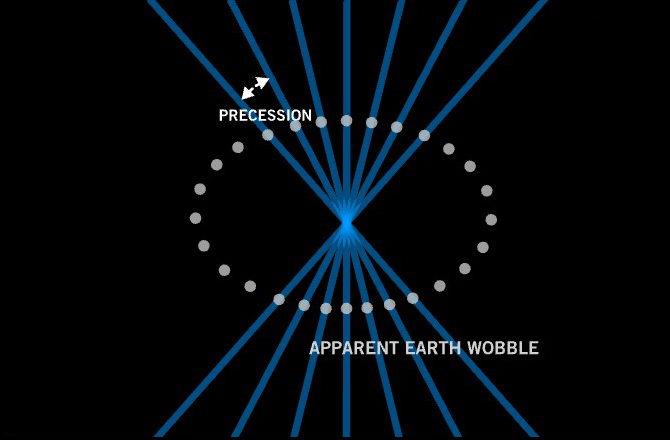 Kepler tells us celestial bodies in orbit around another mass move in elliptical orbits – and that these orbits increase and decrease in speed depending on whether the two objects are moving closer to or farther away from their common center of mass. This changes their angular velocity. Therefore if the precession rate appears to be increasing, then the sun is in that part of its elliptical orbit where it is moving from apoapsis to periapsis – and according to Kepler’s laws it would be speeding up. Thus the variable rate of precession (known to be speeding up ever since modern records have been kept) is no longer a mystery in the binary model. It is simply the trait of an object in an elliptical orbit. The rate of change can be reliably predicted using Kepler’s laws if the basic orbit parameters are known. In fact we have found that by using Kepler’s laws we can predict the precession rate 10 times more accurately than Simon Newcomb’s constant.